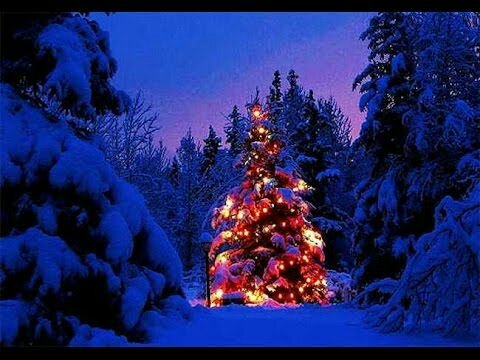 I remember going into the forest and chopping our own Christmas tree. On behalf of David Norris and Mike I would like to wish you all a Merry Christmas and a Happy New Year from Big Bass Lake and Beyond. We’re all looking forward to new articles in 2020which is our 11 th year anniversary. Be aware that we are doing some pruning this year on the website.

Of all the times to visit Michigan we come here when the lake was dangerous with Riptides and high waves. It was posted that swimming should not be happening. In Ludington they stopped it for a few days. I was half tempted to go down toward the state park and try swimming there but Darlene put her foot down and said no. She felt it was too dangerous. Before we leave in a few days the lake should have settled down so I can get a nice cold swim. I just didn’t expect the lake to be dangerous at this time of year. There are bumps in vacations.

Last year Mike and I spent a weekend at the Seaman Lake Resort and had a great time. Mike got in his fishing time while I swam both in Seaman Lake and their pool. I preferred the former but it was nice to lounge around the pool too.

The cabins were spacious and wonderful. I was able to prepare the fish Mike caught with some lemon sauce and fries and he was content to say the least. We took in the lake by moonlight and had some special romantic moments.

It’s good for married couples to get away from their routine for brief periods of time. We even kenneled Frick and Frack for that weekend which we usually don’t do but it’s nice to have some time when they aren’t jumping all over us. I would recommend the Leisure Time Resort to anyone and there is a link to their website on our blogroll. Check it out!

Do you see my comfy little baby yet? My fantastic hammock. It’s right next to the creek. Maybe even some fish to catch. There’s even a campfire pit here. And it’s not far from the cabin. 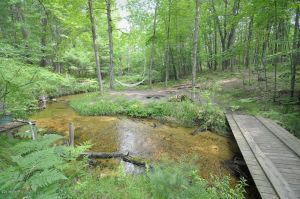 This is our new cabin north of Manistee. Darlene has a large garden to enjoy and Lucky likes being with me on the island. We’ve added to the family two huskies called Frick and Frack. A few bears and bobcats are around. What a great place to live. 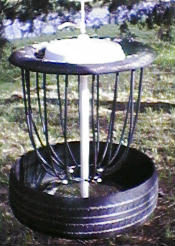 Happy Birthday Big guy! We first met in the Manistee  NatIonal Forest when I saw  you and six boys throwing frisbees at  trees. I naturally asked what you were doing and you invited me to play. Your boys played very good from the Marion Boys Club.

I then treated you all  to lunch at the A&W. We then headed down to the beaches along M 116. What a great day I had that day with fun and great conversation.  Even made a sand castle with the help of James Freshwater. He  told me he didn’t know how  to  swim. I taught him how that afternoon.

Had you over for supper a few days later along with the boys so you could meet Darlene and Fric and Frack. Our friendship still  means a lot to me today Dave. And all because of Frisbee Golf! 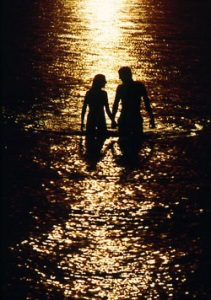 This was taken at Lake Michigan by a good friend who made himself scarce after he took this picture. The photographer knew how to be discreet. After he left Mike and I had a romantic moment that I shall never forget. This was taken several years ago but our love is as strong today as it was back then. Mike has been very good to me over the years. We have one thing in common and that is a love of camping in the Great Outdoors be it in Michigan or Arizona.

On our trip to Colorado last year I was reading an article about how to make a mountain half disappear. I told Mike about it and the words the magician used. AA BOO CLIFF HANGER ALA TALL. He restated that with a laugh and while he went fishing to make some fish disappear from that stream, I went out to take some photographs.

Later, when we returned home, the pictures were soon developed and Mike was astounded at his grasp of magic when he saw this. 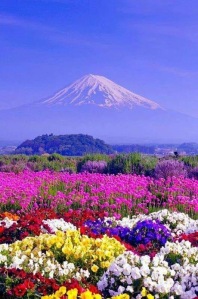 Mike and I are finally back in Michigan for a few weeks and I promised him 2 days of tent camping which ends this afternoon. The first day it felt like Arizona here except for the high humidity. I’ll be glad to get back to the motel. Mike’s been busy fishing and I’ve been busy cleaning. I’ve forgotten how good Michigan fish taste. I haven’t forgotten about how horrible the mosquitoes are here. We’ve done some hiking together and have basically had a good time. At my age I prefer Motel sleeping To tent sleeping any day of the week. The Little Manistee is a beautiful River though. Both of us waded into the cold water and it felt great. The nights have been cool but comfortable. Tomorrow we head for a few days in Ludington and some civilized living. I’ll report to you from there.

Check out this gorgeous scene! Who needs television when you have this? The Northern Lights have put on a fantastic light show almost every night that we’ve been camping around The Great Slave Lake. A whole spectrum of colors can be found and it just takes your breath away. I often wonder if our dogs can take in this view as well? Frick and Frack seem almost immune to this display opting to chase each other and a few squirrels than to be involved in this viewing pleasure.

Mike has caught some great photographs of all this and he is even now clicking some more. He was planning on doing some night fishing but this took him away from even doing that and he rarely misses a chance to go fishing. Tonight he’s fishing for photographs of nature at its best. 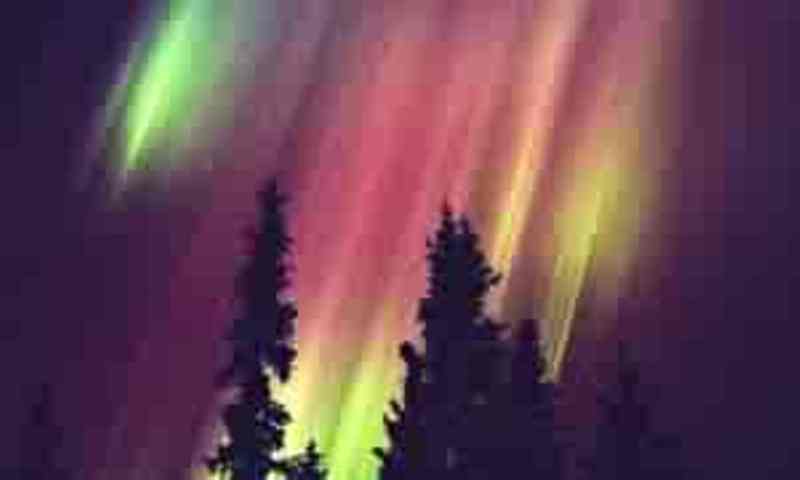 Wow! The colors seen here almost appear as if they were shooting down from the heavens. It’s like a hail storm of colors. A rainbow pales in comparison to these lights. After Mike had completed his camera work he joined me at the ebbing campfire to catch the view above. We just laid back as our dogs joined us and took in the view while chomping down on a few marshmallows. Soon we’ll be heading back south to Michigan but what a way to end our trip. Fantastic! 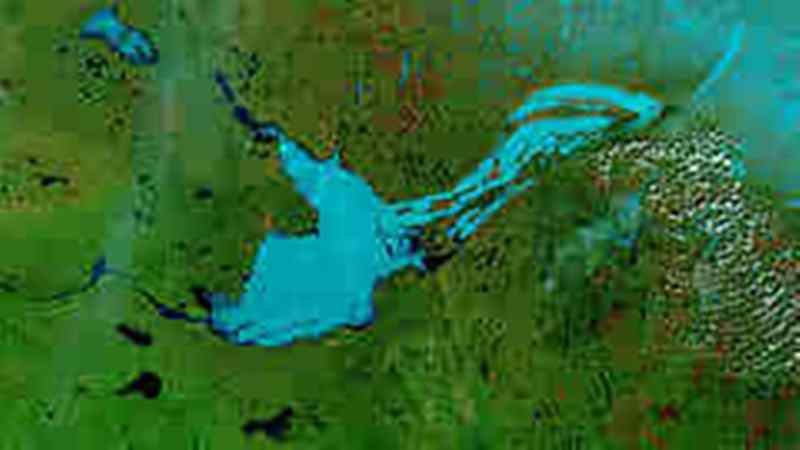 Last summer, Darlene and I traveled into Canada to take a look at one of their “Great Lakes” not numbered among the US five. Darlene will offer her impressions in Part Two but I wanted you to have an understanding of just where we traveled to on this vacation. I also visited an inland lake with another tourist we met on this trip and I will detail that tomorrow.

Great Slave Lake is the second-largest lake in the Northwest Territories of Canada (after Great Bear Lake), the deepest lake in North America at 2,010 feet and the ninth-largest lake in the world. It is 480,300 miles long and 12 to 68 miles wide. It covers an area of 27,200 10,502 square miles in the southern part of the territory. The lake shares its name with the Slavey First Nations.

North American Aboriginal Peoples were the first settlers around the lake, building communities including Dettah, which still exists today. British fur trader Samuel Hearne explored the area in 1771 and crossed the frozen lake, which he initially named Lake Athapuscow (after an erroneous French speaker’s pronunciation of Athabaska). In 1897-1898, the American frontiersman Charles “Buffalo” Jones traveled to the Arctic Circle where his party wintered in a cabin that they had constructed near the Great Slave Lake. Jones’s exploits of how he and his party shot and fended off a hungry wolf pack near Great Slave Lake was verified in 1907 by Ernest Thompson Seton and Edward Alexander Preble when they discovered the remains of the animals near the long abandoned cabin.

In the 1930s, gold was discovered there, which led to the establishment of Yellowknife, which would become the capital of the Northwest Territory. In 1967, an all-season highway was built around the lake, originally an extension of the Mackenzie Highway but now known as Yellowknife Highway or Highway 3. On January 24, 1978, a Soviet Radar Ocean Reconnaissance Satellite, named Kosmos 954, built with an on board nuclear reactor fell from orbit and disintegrated. Pieces of the nuclear core fell in the vicinity of Great Slave Lake. 90% of the nuclear debris was recovered by a group called Operation Morning Light formed with both American and Canadian members.

Darlene and I passed by this location in the UP but did not have time to Stop as I was running late for an emergency dental appointment. I had a nagging toothache but stopped long enough to get this picture. Dave Norris once told me when he was here as a kid he met Mickey Mantles grandmother. This waterfall is located in Paradise, Michigan. 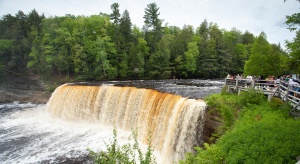 I would love to live here. Just look at that perfect house. It’s ten miles to your nearest neighbor. Lucky would love it out here. Darlene wouldn’t. Way too far out of town but I keep this picture in my den. It’s got a great kitchen and fantastic living room with a large fireplace. It’s in the UP in bear country.

Mike and I were vacationing in Colorado last year in August. We didn’t have Lucky with us on this trip just when we needed him most. Larry and Kisha Sterling were with us a camping trip. Kisha and I volunteered to pick some blackberries. We separated at the bushes. Just past the patch I Saw someone with red eyes and screamed.

MIke was at my side in seconds along with everyone else. I told them what I saw and they started laughing. I told This was not a laughing matter. Mike said Redeye was a Camp Martin Johnson monster but make believe.

Larry examined the area and found footprints there. All of a sudden it wasn’t a laughing matter anymore. We headed back to camp but I know what I saw.

Big Bass Lake and Beyond calendar